Back sometime in January, Tan from CandyBar asked if I’d be interested in doin some work on the walls. There were 2 fat walls, so rather then hang some work I thought it would be cool to just fill the whole space with 2 8ftx 8ft pasters. It will be up indefinitely. Go check and get some crazy good desserts . Thanks To Tan for the Walls and Ramon for puttin in work on the install.

I went out with Gaia, Hugh Leeman and David Young V a few weeks ago on a little sunday outing.  Ended up on Juxtapoz here, Hi fructose here and Brooklyn Streetart here.

A while back I got interviewed for a piece in the New York Times. It made my mom proud.

We threw this up last week in Hayes Valley. It’s fairly large 8ft X 16ft. There’s really no quick way to do this, so the best bet is to just simply act like you’re suppose to be there. I used to hit this wall quite a bit, but lately it had been taken over by illegal advertising. Posters of the latest dumb ass romantic comedy or Sting’s new album available at Starbucks, shit like that. So I decided to take it back. Everything is cool until the guy who owns the lot rolls up. This is generally the ultimate bull shitting challenge. Convince the guy who owns the property that you are ACTUALLY suppose to be there and there was just some miscommunication. It can be done. This particular guy however hated the illegal ads as much as us. So with his blessing we proceeded to finish. Working under permission can be quite liberating. Additionally I got to chat with the owner of Blue bottle coffee, who is apparently a fan. Which is nice because I too am a fan of his coffee.
All and all good day in Hayes Valley. 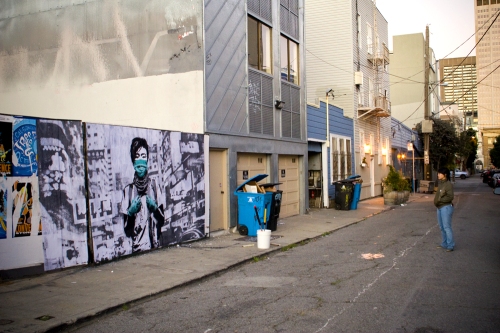 In a post modern society the level of information we absorb can be overwhelming. Synapses get crossed, memories get linked and we cross pollinate our iconography. Elements of visual greatness, that span centuries come together. We write our own histories.