James Swinson and I made this piece at the end of December 2019. Shortly thereafter, the Pandemic hit and we never posted it. The title refers to the Hong Kong protestor’s 5 demands and “not one less”. Unfortunately, the pandemic put the struggle of Hong Kongers on the back burner internationally. But In December of 2019, that fight was still weighing on me. Hong Kong is like, well… Hong Kong is Hong Kong and it isn’t “like” anything else. In a world where cities increasingly become a homogeneous blur, Hong Kong remains a unique hybrid that stands alone, for good and for bad. It is neither Britain nor China but rather the unlikely result of an unlikely series of events. I can’t say exactly what it is to me; it’s draw, it’s seductive nature, the almost unimaginable quality of it’s existence, but somehow it always makes it’s way back into my consciousness. For my girlfriend Rachel, Hong Kong is some magical place of origin that existed before America perverted that reality. For me and my best friend Moy, it is our happy place (if there is such a thing). I was suppose to move there for a while in 2020. Those plans were obviously interrupted. So it becomes that “what if” scenario that haunts me. What if the pandemic hadn’t come? What if the Chinese security law hadn’t been passed? What if this last bastion of originality simply fades and becomes another engineered product of China, like Shenzhen, like Dongguan? What if? I suppose the world will keep spinning, but be a bit less sweet, with a bit less joy and a lingering sense of loss.

As for the piece… I tried to convey this beautiful cacophony of a city being bound by ropes. Additionally James and I placed a petrol bomb in a cage, as the security law essentially outlaws dissidents. Finally the piece is covered with keys to represent the displacement that will inevitably occur in Hong Kong. The loss of home. Keys are of no use when you are never going home.
My faith and hope remains in Hong Kong. I am not a Hong Konger, I am an outsider. One day I hope to be back there and I hope “there” is the same. Hong Kong, in my mind, is too precious to lose, but China is too big to stop and the United States has been resigned to being an impotent participant in these affairs. I am reminded of a quote by Hong Kong Filmmaker Wong Kar Wai. “We love what we can’t have, and we can’t have what we love.”

Cacophony and GFL 5 Release on 1XRUN

The Goldfish girl (who is the same character as the bike girl) was created almost a decade ago. I often revisit it, and she has been longest continuing character I’ve created. I often write back stories for these characters to help me create the pieces, but they are generally never shared with the viewer.

The Goldfish girl was born in mainland China, and raised mostly by a single father. Her mother passed away when she was 18 months old from cancer. She was often very ill as a child, and was eventually diagnosed with a compromised immune system disorder, although a precise diagnosis was never given. However, something even as harmless as a common cold would escalate to further respiratory complications or pneumonia rather quickly as her body had no defense mechanism against these things. This is the reason for always wearing the mask and gloves. She was hospitalized often and resuscitated several times as a child. As a result, she could not attend school with other children and was home schooled by her father.

Her father bred Goldfish for a living and taught her that trade as a kid. They worked side by side and rarely had visitors because of her condition. Goldfish rarely occur in nature, and are actually a result of a genetic mutation in silver carp. Because of their beautiful color and rarity, they began being bred and sold about 1500 years ago. They are, for the most part, a result of steering the hand of nature.

Often being extremely ill and also losing her mother made her childhood difficult. As most children do, she tried to find a reason for her misfortune, a reason for why all this had happened to her and her father. Eventually, she believed that her illness and her mother’s cancer were a punishment by nature. A curse for toying with nature by breeding goldfish. Her family had toyed with nature, and she believed that now, nature was toying with them. She never shared that thought with her father because she felt it would indirectly place the blame for all this misfortune on him.

When she was 11 and extremely ill and hospitalized, she asked her father “Why don’t I just give up? This is too hard. I think we need to accept that this is my fate; it is my fate to die” Her father became angry and replied “Fate? Do you know what fate is? It is the result of a life unattended, it is what happens when you do nothing” He needed to give her a reason to keep trying, a challenge. He continued “We can cheat fate, create our own fate and all you have to do to cheat fate is live another day. Every day that you do that, you have won, not fate”

That was the conversation that shaped the rest of her life, that was her mission, to survive and deny nature its punishment.

Eventually, her father passed away as well. Needing to make a living and also to taunt fate she illegally immigrated to Hong Kong. There is a famous goldfish market in Mong Kok on Tung Choi street, but it’s commonly called goldfish street. With a compromised immune system the most dangerous thing to her was other people. As a challenge to fate she moved to one of the most densely populated cities in the world. She got a stall on Tung Choi street. This is her challenge, to taunt fate and win, becoming the master of her own fate.

These images are vignettes of her life in Hong Kong. I’ve never given the character a name. Often the pieces are accompanied by the text “I have a name, but it doesn’t matter” That phrase is to express her belief that life is not about who we are, life is about what we do. She is pictured always alone. Sometimes she is on a bike as crowded public transportation poses to big a risk. Sometimes she is pictured with a boombox because music becomes a central companion to her mostly solitary life. In the piece Cacophony I wanted her to literally be surrounded by the city. There are many more specifics to the story, but I wanted this character to be a vehicle for ideas about self determination, finding meaning in life and playing the hand you are dealt even when it’s a piss poor hand. In some way I think I tried to create a character that embodied a lot of traits I aspire to. To remind myself.

. After talking with Jesse at 1xrun we decide we wanted to do something different from a typical limited edition. These print started out as giclees on 300lb acid free water color paper. After that there were really embellished in a lot of different ways. Every print was drawn on with pencils, markers and mop pens and part of the image were overpainted with acrylics. They were then tea stained and airbrushed in 6 different colors. At this point the prints were distressed using sandpaper and steel wool and the text was screen printed onto the image. The test roughly translates as “I have a name but it doesn’t matter”

In addition to the 20 embellished prints there were an additional 3 prints made with the text gold leafed in 22kt gold. This print will be released on 1xrun.com on April 25th. You can see it here

I just found this animation on youtube using one of my wan chai stickers. Kinda dope

Back sometime in January, Tan from CandyBar asked if I’d be interested in doin some work on the walls. There were 2 fat walls, so rather then hang some work I thought it would be cool to just fill the whole space with 2 8ftx 8ft pasters. It will be up indefinitely. Go check and get some crazy good desserts . Thanks To Tan for the Walls and Ramon for puttin in work on the install. 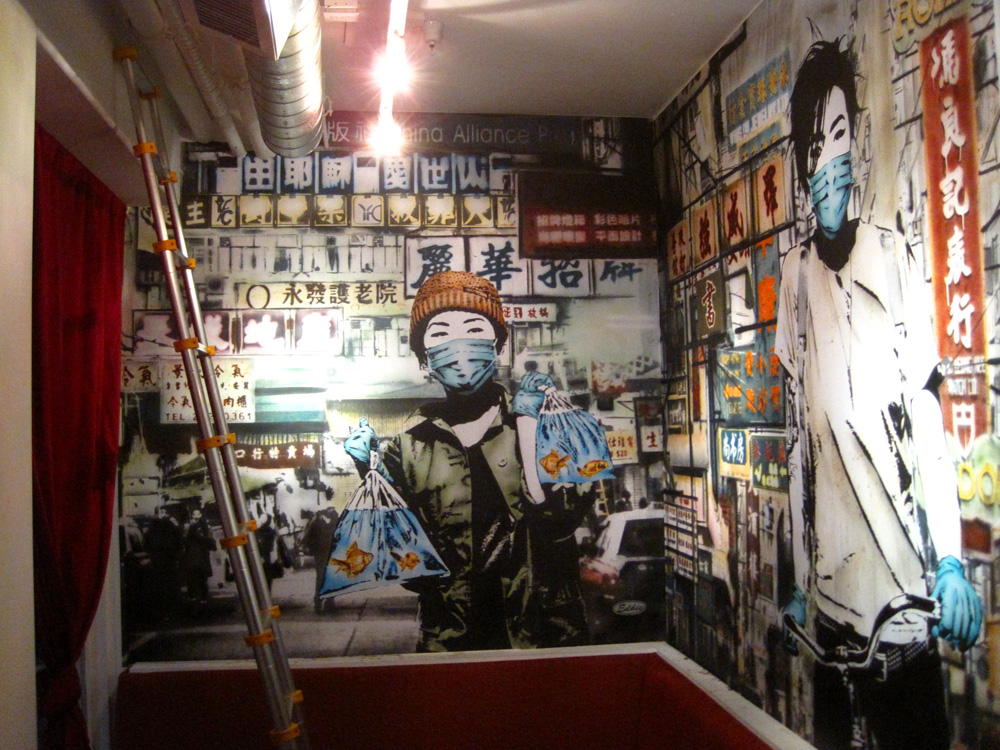 Got these in yesterday. 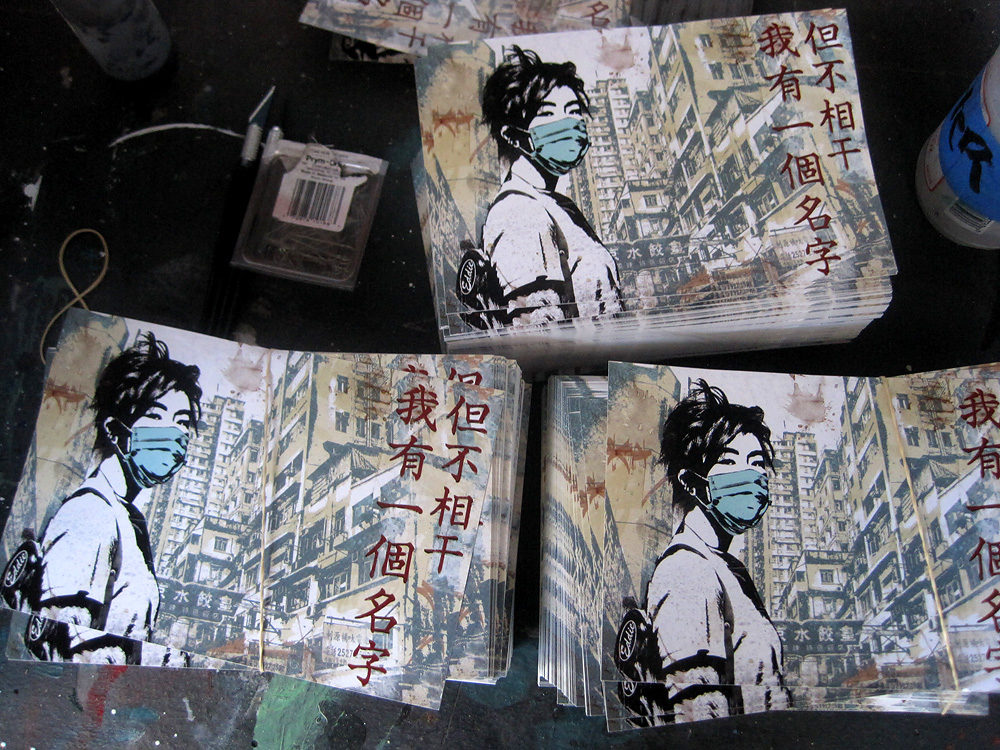